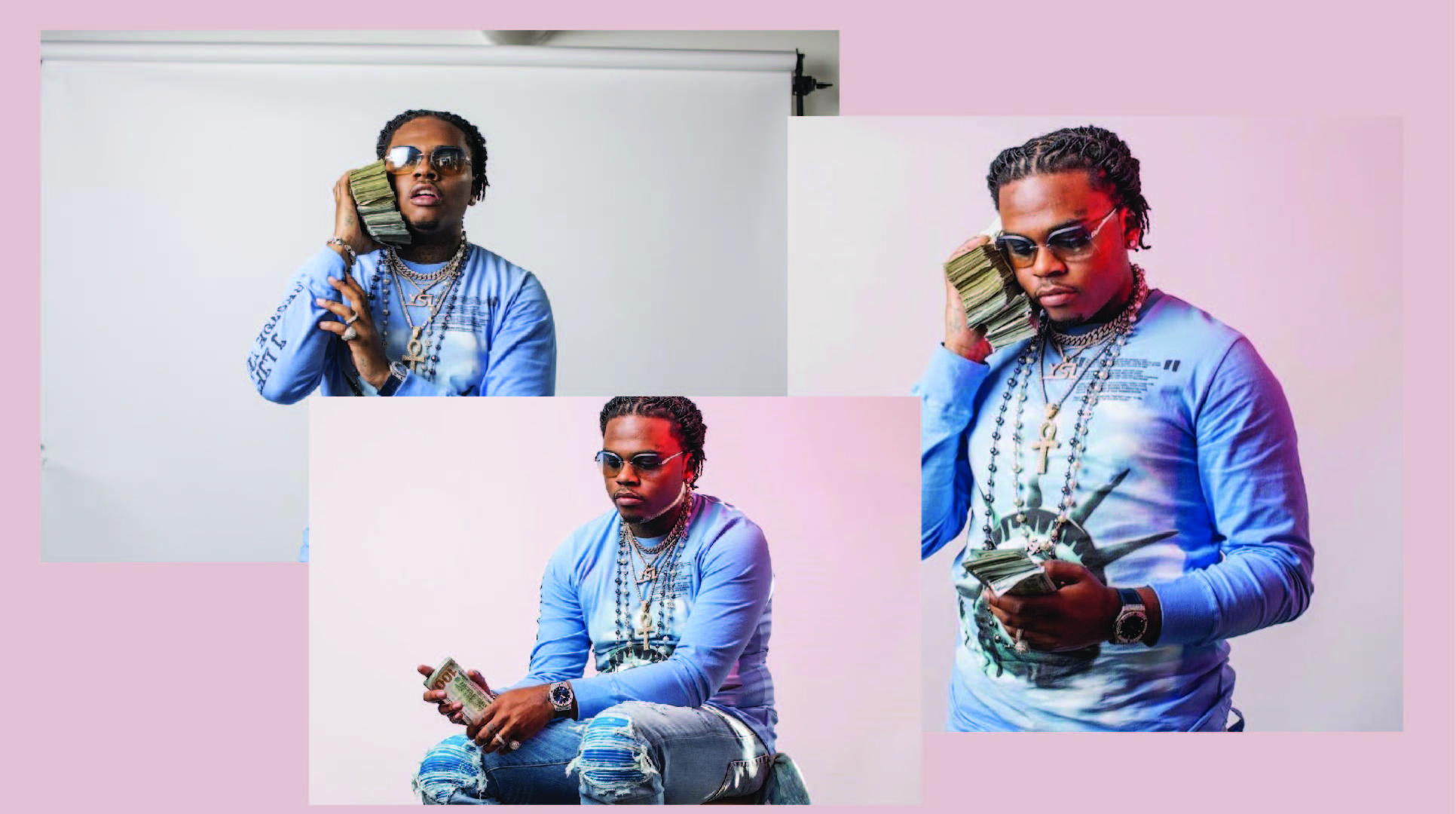 The Case For Gunna, or his New Album Cover

What does it mean to drip or drown? This week, we look at how one artist, Gunna, is navigating the boundaries between the two through a close look at this performance style and his newest album cover. A man stands alone in a grey room. A...

What does it mean to drip or drown? This week, we look at how one artist, Gunna, is navigating the boundaries between the two through a close look at this performance style and his newest album cover. A man stands alone in a grey room. A microphone hangs down, compelling him to speak. He talks at the microphone, his hands operating in a small square, starting from his stomach and occasionally moving when his words compel him to. His gaze is calm and focused, like the gaze of a worker sitting at their computer, sending out some sort of memo. He is wearing what looks like a freshly pressed soccer jersey for the team Juventus from Turin, Italy. The name is emblazoned along with its sponsor, Jeep, and its manufacturer, Adidas. The shirt, just like the room, is grey. The man in the room, Gunna, evokes on first listen the room of grey that surrounds him. However, Gunna, in his performance of the song “Top Off,” along with the release of his new album Drip or Drown 2, especially its incredible album cover, shows his capability to exist as someone other than a bystander. Simply by existing as a massive melodic monotone figure, Gunna bends the music industry to his will, not the other way around. His new album cover explicitly highlights this fact, and in doing so makes it one of the best album covers of 2019, illuminating Gunna’s status as the promoter of a new kind of luxury in rap music and the mainstream. At the beginning of the video, Gunna waits as the music plays. It ascends and descends while remaining simple. It’s a fun and space-y sound, but it’s prickly. Gunna’s objective is to have a tempo and keep it throughout the song, matching it to the beat behind him. He stands for a few seconds, and after a few introductory pleasantries (“No rap! No rap cap!”) the drums come in, and he’s laser focused. He sings the words, but he’s barely married to them. He presents them simply as they are, and keeps going. A man at his day job. His nonchalance creates an air that makes the atmosphere around the song greater than the sum of its parts, a song which forces further listening simply due to the lack of movement. Like his body, his voice only quickly moves outside of the song’s (vocal) space, giving short punctuations that only enhance the overall experience. The voice stays relatively still, shrouded in grey, Gunna standing still too, living in the cubicle of a singer. He takes this corporate nature of his appearance and instead of breaking out of it, embraces it sonically and aesthetically. There are hints of brightness, but they stay as hints; the intriguing sounds throughout the beat remain short and chopped, with no time to breathe or explode. With all the care that Gunna takes in crafting his performance, an amazing thing about it is how non-intimidating it is. Even inside this relatively “boring” structure (one microphone, standing still, grey walls), he somehow makes this mood, this corporation color and mindset, trustworthy. He draws you in, telling you to dive in, the water’s fine. This control is all the more captivating considering the circumstances surrounding him and the video. Gunna, first presented to me as a feature on Young Thug’s “Floyd Mayweather,” was nothing more than a paper weight. The features on the song besides Gunna, Gucci Mane and Travis Scott, are two titans with styles that break the mold, to say nothing of Young Thug (see his cover for the album  “Jeffery.”) Gunna, however, persisted. With fellow Atlanta-ee and labelmate Lil Baby (Dominique Jones), Gunna continued a slow and steady climb to the top of hip hop, culminating in a top 5 hit (“Drip Too Hard”) and a recently released top 5 album (Drip or Drown 2.) Instead of changing his monotone flow, he doubled down, focusing heavily on the craft of the song and the voice as a whole, giving him a sound that is both smooth and bland, a fun greyness.

Gunna has also capitalized on his ever increasing popularity through personal purchases of fashion and advertising deals. Drip, which I vaguely define as showing off clothes or jewelry in a moderate, tasteful fashion, has been on Gunna’s mind a lot, specifically the limits of drip. To have much too much drip is to drown in the drip, but not necessarily physically. In Drip or Drown 2, Gunna is seen submerged in water, with an umbrella, some nice glasses, a chain, a watch, a name brand designer shirt, and some rings. Although he’s wearing a lot of wealth on him, it’s hardly excessive. In fact, the cover of the album perfectly shows the normal amount of drip one possesses in today’s rap climate. For excessive or loud jewelry, we can find many other examples. Instead, the “drowning” aspect comes from what is a compromising of self for corporation, or the industry.

And Gunna, on the surface, seems like he is drowning. The COLORS video I’ve been mentioning, the one with over 10 million views, is also an ad for Adidas Soccer. The crisp shirt he was wearing was a paid advertisement, and his appearance was sponsored by Adidas as a whole. To be obsessed with drip and fashion seems potentially obsessive and all-consuming, considering Gunna has released 6 projects with “drip” in the title. In many ways he feels like a walking brand, an advert for materialism preaching the glories of Balenciaga and classy, approaching over-the-top luxury. But Gunna, of course, is well aware of this predicament. While Gunna is under water, he is not scared of death. Instead, he cannot be phased, staring into the camera, almost asking us for help, asking us to pull him out. He is committed to the drip, no matter what.

this gunna album cover is no joke 10/10 commitment to ? respect bro

And this pays off! His commitment is so strong that his COLORS advertisement/video feels natural, and that’s for a reason. Even if Gunna would have worn something completely different, Gunna has taken something as a large as an international soccer team with one of the most popular and ruthless celebrities on the planet(Cristiano Ronaldo) and made it alluring and friendly. Companies are paying him to promote the idea of a causal, soft, almost kind luxury, and he’s taking full advantage. When you see Gunna, you see someone who offers a luxury that while on the surface alienates due to price subverts itself by promoting something as mainstream as a soccer jersey. He has made his mark as an alternative form of luxury, and an alternative form of drip. Drip is coated in humility, a fear of having too much drip, of alienating and hurting those most loyal to you. While his current album is not doing well critically, the album ensures his survival as a rapper versed in the language of drip well into the third decade of the twentieth century. He also notably featured on Playboi Carti’s Die Lit, a rapper who explicitly molds his voice differently around sparkly instrumentals, almost an opposite of Gunna’s internal rebellion, to stunning effect.

Gunna has created a lane that is explicitly his own, not because he sounds entirely different (the Young Thug comparisons are endless), but because he has an ease and control over his voice that few others possess, and a friendliness that is participatory, and honestly, exciting. Gunna lives inside the corporate world of music by doubling down on his drip, toeing the line carefully and effectively, culminating in a beautiful, honest and wacky album cover and a sound that is persistent and calm. If you do nothing else, give Gunna, or at least his album cover, a chance.

drip or drown 2 but with michael cera pic.twitter.com/ywjw9LBgrm