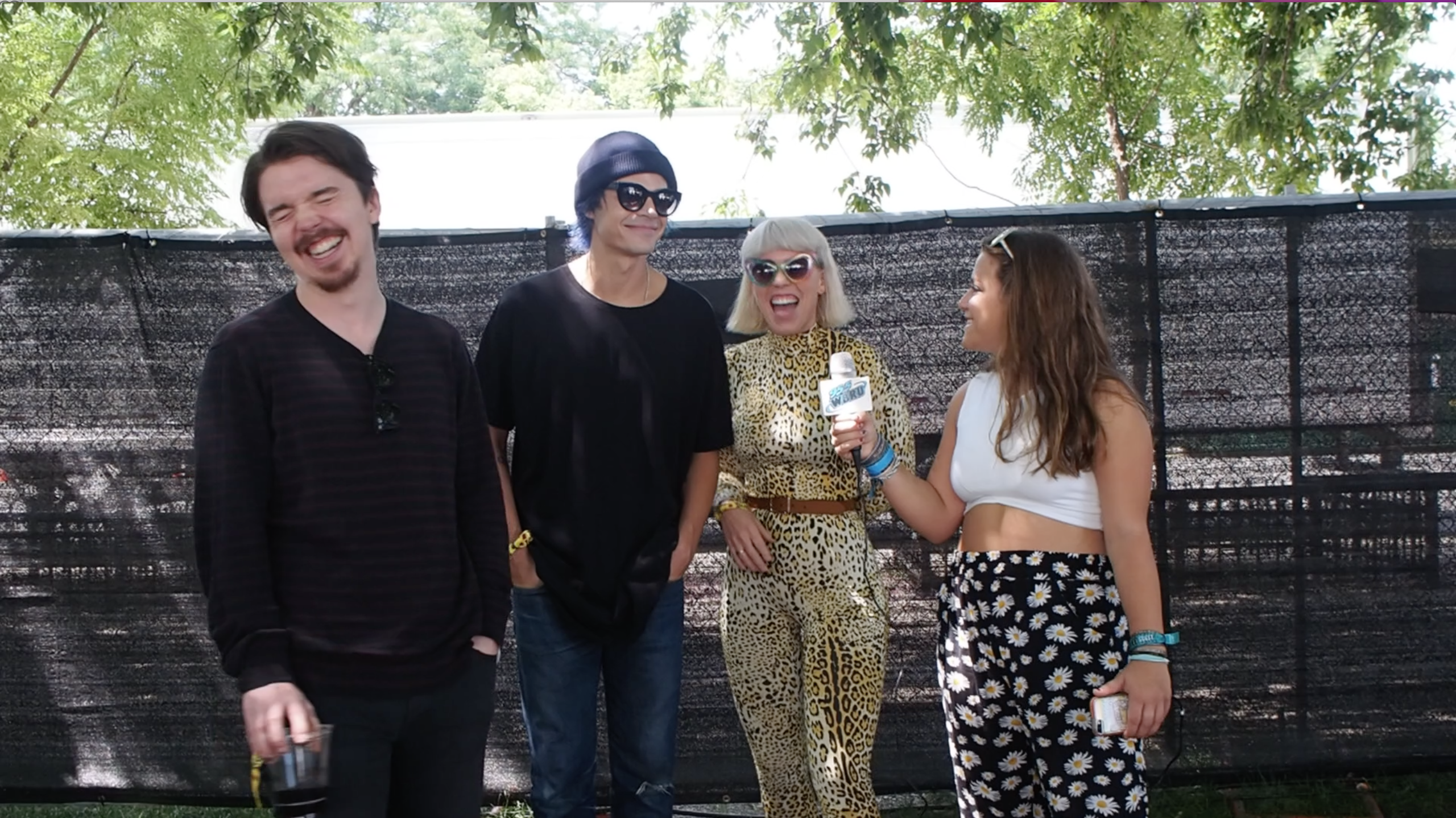 CJ and Stella headed out to Lollapalooza to enjoy the festivities and talk to some of the amazing acts! Check out CJ’s interview with GROUPLOVE below! CJ: Hi, I’m CJ from WBRU, coming at you live from Lollapalooza, and I’m here with some of the members of Grouplove!...

CJ and Stella headed out to Lollapalooza to enjoy the festivities and talk to some of the amazing acts! Check out CJ’s interview with GROUPLOVE below!

CJ: Hi, I’m CJ from WBRU, coming at you live from Lollapalooza, and I’m here with some of the members of Grouplove! What’s up, guys?

HANNAH: It’s great to be here!

CJ: So, this is not your first time here?

CJ: So, what was the motivation to come back?

HANNAH: We just couldn’t fight it!

CJ: You guys play a lot of festivals! Is that intentional, or just how it works out?

CHRISTIAN: We’re just fortunate enough to be able to be invited to them.

CJ: Your new album came out in September, and one of the things I’ve heard about it is that it’s a great festival album- lots of songs that really reach out to the audiences, great in an outdoor space, things like that…do you feel that way? Is that something that you’d planned?

CHRISTIAN: Well, we just tried to make a lot of the songs on this record the kind that you can shout along to, and so it was kind of a bit different than our first record. We didn’t want to make a sad record, and these songs have a bit of a different, upbeat vibe.

CJ: So a sad record, is that next on the list?

HANNAH: Originally, we were writing sad- I mean, not writing sad, but writing sad songs- and we always ended up coming together and jamming on them and it changed. I feel like playing in front of a large audience means the songs have to be different, because the place is a lot bigger, and there’s people joining in a lot.

CJ: So how does that compare to TV? I’ve seen you on TV a lot, on shows like “Conan”, and things like that…how does the vibe change at all, being inside?

HANNAH: I mean, the song is still the song, and by the time you’ve seen it on TV, we’ve played it like seven times, so it’s pretty rehearsed by the band. But, I mean, it’s definitely a different vibe for us personally.

CJ: Ok, so switching gears a little bit- this is a question I’ve always wanted to ask- GROUPLOVE- all caps. It’s supposed to be all caps?

CHRISTIAN: There’s a lot of love in the group.

HANNAH: And we’re also really loud as a band…it’s kind of funny, because on Instagram, and social media, there’s no caps… we try put it on all caps, and it takes it off every time.

CJ: Haha, awesome. So do you do your own social networking?

HANNAH: Yeah, we do Instagram, and Facebook, and Twitter, and all that stuff is run by us. I’m actually all over Instagram…and Christian and Danny have one too.  But you know, there’s something about the group, you know, us all being together on social media, it’s more of a shared thing, rather than having access to all of us.

CJ: So, I was looking through your [Hannah’s] Twitter earlier and I saw you retweeted something that said you might be making a guest appearance at Young the Giant’s after party tonight… Is that true?

CJ: Maybe… Well we might be making a guest appearance there too! So, who else are you guys excited to see today?

HANNAH: Nas is today, right? I’ve got to run over and see that.

CJ: And you’re going on tour with Portugal the Man?

CJ: Yeah, that’s awesome, we got to chat with them yesterday. So you’ve been friendly with them, right? I’ve read some pen pal letters.

CHRISTIAN: yeah, me and Zach wrote to each other back in the summer of 2013. It was pretty fun.

CJ: And, I was looking over some of the highlights from those, and you guys were speaking of doing a collaboration?

CHRISTIAN: Yeah, we definitely have to do some things together. We don’t really want to make it so much of a separate thing as much as we want to combine the two of us.

HANNAH: Bands always like to do covers together anyways, but ….. I think that’s much more original.

CJ: Well, I can’t say that I’m all that happy about the tour, because you won’t be coming back to Providence… but you’ll be in Boston. I might have to make the trip out a little ways.

HANNAH: Well, I might move to Providence for a few days, maybe.

CJ: Really? What inspired that?

HANNAH: I don’t know, I just really love it there in the summer, and I kind of just fell in love with it. It’s close to New York but it’s not New York, and I love it, I love the architecture there, I love Thayer street, and things like that in the area.

CJ: Well, definitely hit us up if you’re ever back in Providence, and thanks so much!